The global automotive market is expected to grow at a CAGR of 4.5% over this decade according to Market Research Future. The key drivers for the growth are increasing demand for connected vehicles, autonomous vehicles, advanced infotainment systems, ADAS, and emergence of smart Traffic and Road safety applications.

As we strive to achieve full autonomy of vehicles, which is fast becoming a reality, we will witness higher number of sensors getting employed in vehicles as well as intelligent, connected external transport infrastructure. One of the essential components of automotive systems – be it in-vehicle, or with infrastructure outside vehicle – that enable wireless communication is RF Antenna. Antenna technologies are also greatly enabling related technologies like network connectivity, Global Navigation Satellite System (GNSS), Global Positioning Systems (GPS), Vehicle-to-everything (V2X) leveraging the higher speed and security of 3G, 4G, LTE, and more. Automotive antennas usually operate in frequencies ranging from AM band (535-1605 kHz) to the millimetre-wave band (24GHz, 77 – 81GHz).

Today’s vehicles are loaded with a number of advanced Electronic Systems. These systems aid safe and secure driving, offer seamless connectivity and provide numerous entertainment choices to driver and passengers. 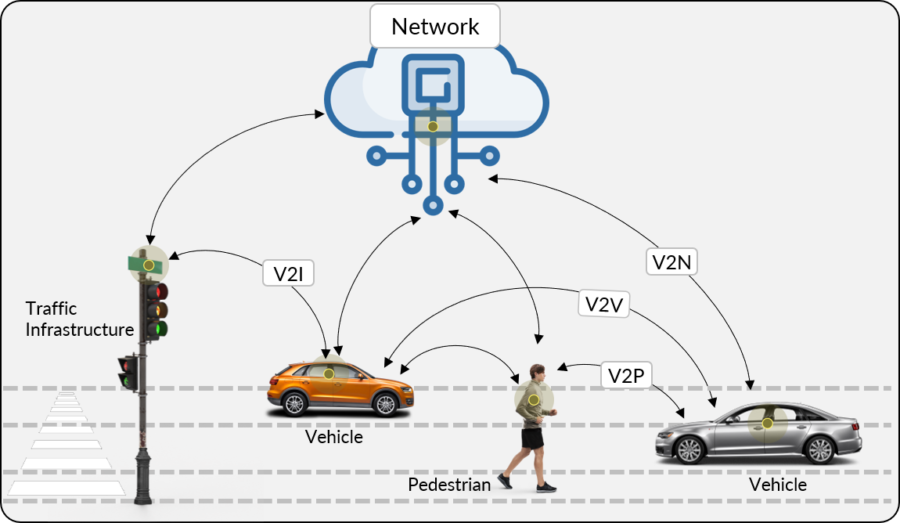 These systems are enabled by various types of Automotive antennas and sensors operating at different frequencies, offering detection, identification, classification and wireless data communication. In this blog, we look at a few commonly used Automotive antennas,  technologies and their applications.

Planar Antennas are becoming popular in Automotive sensing applications due to their low cost, low profile (more compact and lightweight) and ease of integration on host platforms. These antennas meet the fundamental requirements of various automotive applications due to high gain, and low loss. The low profile of these antennas also facilitates easy integration without hampering the aesthetic signature of vehicles. One of the key advantages of planar antennas is the convenience they bring in to form large array structures combining various elements such as microstrips and patches, providing narrower beams and better angular resolutions. Designers prefer Planar Antennas to form phased and conformal arrays and can support linear and circular polarization based on the design used. Planar antennas are commonly used for wireless communication systems such as FM, AM, TV, Wi-Fi, and DAB audio reception, in automotive vehicles and are installed under an aperture in the roof of a vehicle.

Microstrip Patch Antennas have become very popular in recent decades due to their thin planar profile which can be incorporated onto the surfaces of consumer products, cars, aircraft, and missiles. These planar antennas have low profile, low cost, and are conformable to planar and non-planar surfaces. They can be easily fabricated and integrated to communication systems as they are printed on circuit boards directly. The printed circuit technology also provides high dimensional accuracy, which is usually tough to achieve using conventional antenna fabrication methods. A typical Microstrip Antenna has a radiating patch on one side and a ground plane on the other side. 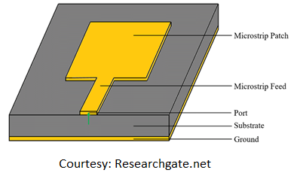 Microstrip patch antennas can be of various shapes (rectangular, circular, ring, triangle, quintuple, etc), designed to match specific characteristics of the application. They are commonly used in SDARS satellite communication, WLAN and Car-2-Car Communication, GPS systems. These antennas are unobtrusively flat and can be easily employed in a vehicle’s structure, typically behind a fender or bumper.

Microstrip Patch Antennas, despite being gaining a lot of popularity, have their own restrictions as well, especially the narrow bandwidth in terms of impedance, circular polarization axial ratio, gain level, etc. Achieving higher efficiency for antennas have always been a challenge and a top priority for designers. And, one of the recently adopted methods to overcome the limitations of Microstrip Patch Antennas is stacking of multiple patches, which is known as stacked patch antenna. 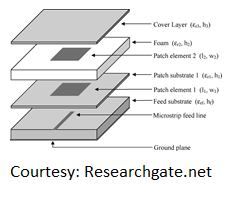 Another Planar Antenna which is harnessing lot of popularity among Automotive Wireless System designers. Microstrip Patch Antennas have a typical frequency bandwidth of 7% which may not meet the needs of modern wireless technologies. This limitation can be overcome by using Planar UWB antennas, which has wider bandwidth and monopole like pattern. Due to wider bandwidth, higher data rate, low power consumption, less complexity and relatively low cost of fabrication, UWB Patch Antennas becoming a key component in automotive environment and other wireless communication applications. UWB Antennas operates in the frequency range of 3.1–10.6 GHz and are designed to exhibit omnidirectional radiation characteristics. These antennas are ideal for short-range communication, to transfer data over wide frequency bands above 500MHz. UWB antennas enable remote car management by pairing with user’s phone to lock and unlock doors, enhanced security, improved V2X engagement, etc.

Chip Antennas are compact, low-profile and offers high performance and reliability. They are designed for easy integration into wireless communication systems. In an automotive environment, Chip Antennas of various bandwidth is employed to establish in-vehicle and vehicle-to-infrastructure connectivity. Antennas for BLUETOOTH, WLAN, Cellular, GNSS, DSRC, SDARs, etc. are now coming in Chip, making it more compact and efficient.

Antenna arrays are a combination of multiple identical antennas that help generate more powerful radiation of particular shape. The gain and directivity are relatively higher in antenna arrays compared to the single element antennas. Antenna arrays are considered the best method to design low-profile, high-performance antennas due to their high gain and directivity, low mutual coupling between the array elements and low side/rear lobes. The geometry and the position of antenna elements, the distance between the elements, excitation phases, and the radiation pattern of each element defines the beam formation. 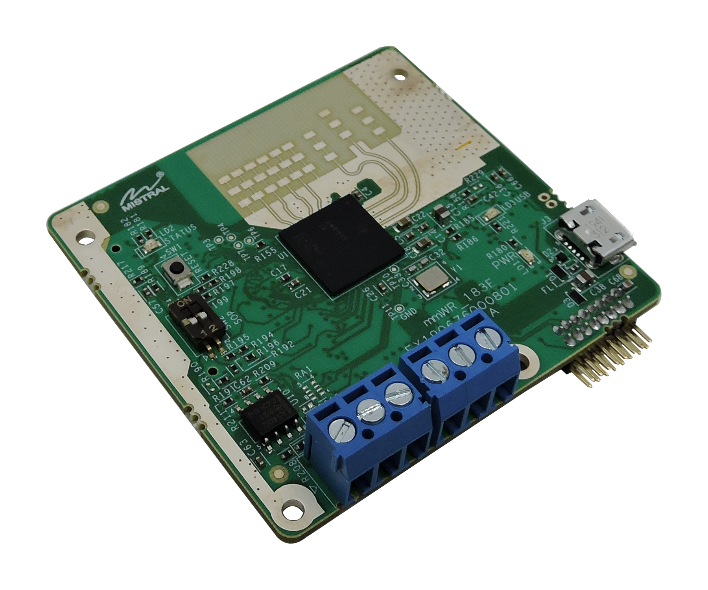 The 24GHz and 77GHz mmWave Radars can be designed based on various antenna patterns. Some of the popular antenna types used for SRR and MRR Applications are Microstrip Patch Antenna Array, Microstrip Grid Antenna Array, Microstrip Comb Antenna Array, Circular Grid Antenna Array, Planar Dual-Polarized Microstrip Patch Antenna, etc. We have already discussed that; planar elements can form array structures by merging simple microstrip patches. This is the basic principle behind designing 77GHz mmWave antennas. The grid arrays provide improved beam scanning with a wide bandwidth of 4 GHz in the frequency range of 77–81 GHz. Number of transmitting and receiving elements (typically microstrip patches) can vary based on the end application.

Non-planar Antennas are typically Patch Antennas integrated on a curved or non-planar surface (substrate). Typically, these antennas are fabricated using flex substrates which can be molded on to a nonplanar surface. Non-planar Antennas are relatively complex compared to Planar Antennas, due to its geometry and fabrication challenges. The designers have to consider the impact of flexing the substrate on the impedance of the antenna. The common planar antennas used in Automobiles are Monopole Antenna (Also known as Whip Antenna) and Sharkfin Antenna.

This is one of the most popular antennas that enables a broad range of applications, from VHF sound broadcasting to car-2-car communication. A Monopole Whip Antenna consists of a foot and a rod and is usually placed on the centre of the roof of a car. Alternatively, they can be placed on an edge of the roof or on bumper. Whip antennas are ideal for VHF, UHF, Cellular, LTE, and WLAN applications in Automobiles. Due to competitive pricing and easy integration on vehicles, Whip antennas are among the most preferred in automotive industry. 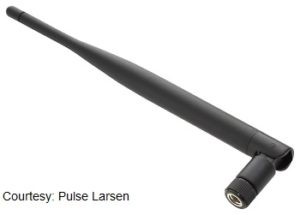 Monopole Whip Antennas, however, bring two major drawbacks. These antennas are significantly large and protrude over the vehicle roof, impacting aesthetic signature of the vehicle. Thus, Automotive OEMS are now keen on adopting newer technologies and designs that assure higher efficiency, but has least impact on the visual coefficient of the vehicle. Another drawback of monopole whip antennas is their narrow bandwidth, which limits its capability to transmit receive signals of varying frequencies. The research to overcome these drawbacks eventually resulted in the innovation of Sharkfin Antennas.

Sharkfin Antennas are more recent innovations compared to other conventional antennas employed in an automotive ecosystem. These antennas are gaining popularity as they are more functional, aesthetically appealing and rugged. Sharkfin Antennas are more compact in size and consists of multiple antenna elements catering to multiple applications. For example, a sharkfin antenna can include multiple of PIFA (supports MIMO-LTE), V2V antennas working at 5.9 GHz, WiFi (can support dual bands at 2.4 GHz and 5 GHz), patch antenna for GPS application, etc.

The co-existence of multiple antennas catering to multiple application within the compact shark-fin case is a design challenge, as it can impact the efficiency due to the mutual coupling effect. However, a perfectly designed Sharkfin antenna offers high gain and superior performance for applications such as navigation, tracking, communication, SDAR, V2V communication, WiFi, etc.

With the emerging trend of self-driven vehicles, a large number of antennas and sensors are getting employed on vehicles. The key question is, where to place these antennas?

For any antenna, proper placement is fundamental to optimal performance. Antennas should be decoupled from any other conducting parts and sensors of the vehicles. If they are not used in the right way, the efficiency will be compromised to a great extent.

The roof of the car is considered as the ideal place for integrating antennas, as it fulfils fundamental requirements – high above the ground and least obstructed – providing good spatial coverage along the horizontal plane. Omnidirectional (AM/FM, GSM, 3G, LTE, WiFi, V2V) and directional antennas (Navigation, SDARs, Satellite Radio, 24/77GHz) can ideally go into roof of the vehicle. Shark-fin antennas (which are typically a combination of antennas catering multiple services), rod antenna and satellite antennas are typically placed on roof.

Mounting multiple antennas into rear spoilers and concealing them under polymer composite panel on roof are developments pioneered by Toyota and Volvo in 1990s and early 2000s. By embedding multiple antennas into the spoiler and roof, designers could efficiently optimize the use of the space without compromising the aesthetic appeal. Telephoning and satellite broadcasting SDARS antennas, Sound and TV broadcasting VHF-antennas, GPS-antennas, and Car-2-Car Communication antennas are some of the antennas that can be integrated into the spoiler.

In the absence of rear spoilers, antennas can also be placed into the rear windscreen. As an alternative, side windows are also preferred, however, the smaller size of the window may bring in challenges while accommodating multiple antennas. Foil based fractal antennas, which is popular in mobile phones, has also been applied to the automotive industry in the recent times. Today, we find these antenna structures being implemented in various automotive applications – eg. rear-view mirrors, garage door openers, parking entry systems, etc.

The automotive industry is transforming. PricewaterhouseCoopers (PWC) defines it ‘eascy’ – electrified, autonomous, shared, connected and yearly updated. And that one component which plays a major role in this transition is the vehicular communication systems. As the industry evolve from standalone vehicles to a complex network of interaction between vehicles, IoT gateways, mobile or static radio devices and smart traffic infrastructure, there is little wonder to say, these changes are enabled by the ever-evolving antenna technologies.