Industrial automation systems typically require data acquisition and processing in real-time. These systems could range from a simple lighting control system to a large distributed control system comprising of sensors/actuators, industrial gateways, monitoring and processing units. Designing such an embedded system puts forth a lot of challenges for design engineers in terms of striking a balance between low-end micro-controllers to performance oriented processors. This can be addressed in an optimal way if the design is done keeping the complete system and its end goals into consideration.

I’ve put forth here a high level approach to overcome these challenges using various system resources to enhance the performance. 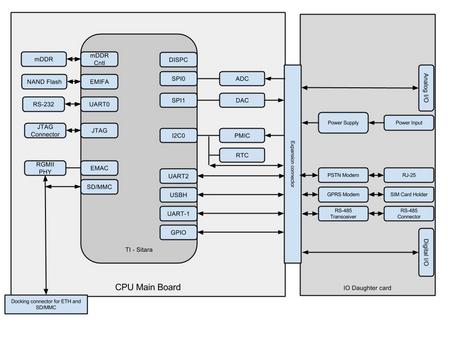 We were designing an industrial data acquisition system and had constraints in terms of the total product cost. We opted to go with a TI-Sitara processor with ADC and DAC connected over the SPI bus. The system also has the Digital IO expander connected over I2C based IO expander.  The system runs on Linux Operating system (with RT patch) with standard BSP & Drivers for all on-chip peripherals.

The key aspects of the system are: –

The single largest challenge determined during the implementation and testing is associated with the capture of the analog input. To be able to capture the analog input at 1KHz for all channels, the ADC has to be configured for higher sampling rate of 16KHz. Since the ADC does not provide the buffering, all the captured data will have to be read immediately to avoid it being overwritten with new data corresponding to different channel.

The ADC provides an interrupt after completing the conversion for each channel. The standard driver implementation would register the interrupt and initiate the read of the SPI registers. Incidentally, for reading the SPI registers, there is a need to perform SPI register write (so as to generate the required clock). Due to interrupt latencies of Linux (even with the RT patch incorporated), the ADC capture is being missed.

Below is the representative summary of the flow of control and data.

Owing to the large interrupt latencies, context switching time in Linux and the interaction between the kernel space and user’s space components, there was an overall delay. This limits the overall sampling rate.

Issues like the one stated above are likely to occur while various disciplines are working as islands; i.e., the hardware, BSP & applications are working disconnected with each other having fixed interface plans. Instead, if the design is done keeping the complete system and its end goals into consideration, such problems can be solved in much optimal way. This is Illustrated below.

This approach yielded the following benefits.

Thus, as showcased above, a thorough understanding of the SoC and its features and seamless integration between the hardware, BSP and application are key to a successful optimization of System performance optimization for a variety of embedded devices.