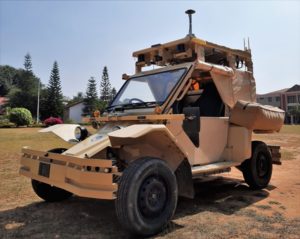 According to a study conducted by IEEE, by 2040, three of every four vehicles will be autonomous. While most of the major players’ focus is on Autonomous passenger vehicles or semi-autonomous vehicles, there is a huge void in utilizing the relevant technologies for security and surveillance applications.

The article unreels various open-source tools and technologies that come handy while designing a cost-effective and reliable unmanned ground vehicle or an Autonomous Navigation Vehicle Design based on an electric platform, conforming to various safety standards and ruggedness needs of the vehicle. Here the focus is on building a multi-terrain vehicle rather than a design that suits just roads. The article also discusses about the surveillance payload that can be integrated into this vehicle.

What is an Unmanned Ground Vehicle [UGV]?

A simple definition for UGV or an Autonomous Navigation Vehicle Design is a ground vehicle that can runs independent of a human operator. It uses a set of sensors to observe and cognize the environment around it, while various drive by wire actuators and motors perform the operational part.

This section outlines how to build a high-quality software package using various open-source software tools in the market.

Maps and Navigation: Various open-source Maps and Navigation tools help to integrate dynamic maps in vehicle web application. It is very easy to customize the open-source platforms by accessing the APIs or using 3rd party libraries. Developers can also build a Web based GIS system and integrate it with the ROS, along with various algorithms to identify & define the path of the vehicle and turn by turn navigation support. There are open-source tools that provide free geospatial data, which help developers to generate and define a path for the vehicle.

LAMP: LAMP represents Linux, Apache, MySQL and PHP/Python – the four opensource components. LAMP is a reliable platform for developing an Autonomous vehicle web application. LAMP makes the developer’s life easy by minimising the programming efforts that a complex autonomous platform or a robot ask for.

The vehicle platform is one of the key components of the UGV. An electric vehicle platform makes it suitable for an unmanned ground vehicle, as it helps surmount several mechanical customization challenges of a standard platform and allows easy access to vehicle network for obtaining data such as engine status, fuel status, gear level, clutch, and so on. Drive by Wire also known as X-by-wire is transforming vehicles. Drive by wire rely on electronics and various sensor inputs to control the vehicle operations such as steering, acceleration and braking.

Look at the various hardware components that constitute a UGV.

AC Motor: The prime concerns of an autonomous vehicle designer while considering an AC motor for the Unmanned Ground Vehicle or Autonomous Navigation System include torque, power and efficiency of the motor. While choosing the motor and evaluating the power requirements, a developer should consider its terrain of deployment. 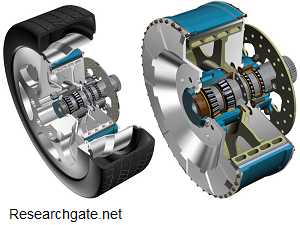 Wheel Hub Motor: Hub Motors power each wheel and provide thrust and launch power to the vehicle. Integrating powerful Hub Motors to an autonomous vehicle make it efficient and capable for tough and demanding environments.

Steering Control: Another key component is the automatic lateral control of the vehicle. An EPAS (Electric Power Assisted Steering) system, with a Controller integrated into the steering column, in addition to the electric motor and a torque sensor is ideal for Autonomous vehicles. The EPAS Controller unit receives inputs from the computer, which in turn controls the Steering to achieve the desired lateral movement.

Braking: A Linear actuator based braking control system is ideal for service brakes and ACME based Linear Actuator for parking brakes. For electrics platforms, regen (re-generative) brakes have an advantage. They make use of the Kinetic Energy generated while braking and convert it back to stored energy in the vehicle battery.

Vehicle Communication Networks: The Vehicle Communication Network connects the in-vehicle electronics and devices as well as the vehicle itself to the external world using various technologies such as CAN, Ethernet, WIFI, Mesh Network, etc. A reliable and redundant communication network structure is key as it handles huge amount of high-speed data from several sensors and processors. A gigabit-speed network is ideal as it provides high-bandwidth, low-latency, and high-reliability links, paving the way to real-time autonomous operations.

An autonomous vehicle basically relies on GPS & IMU for localization and navigation, and the Perception Sensors to perceive surrounding environment. While GPS and IMU provides vehicle position, speed, directions, etc. sensors like Camera, Radar, LiDAR, etc. are very crucial to generate perception of the surrounding environment to facilitate in decision making.
Take a look at the Sensors that are key for an unmanned ground vehicle. 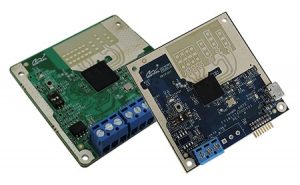 mmWave Radar: Radars provide crucial data for safe and reliable autonomous vehicle operations such as obstacle detection, proximity warnings and collision avoidance, lane departure warnings and adaptive cruise control, among others. One big advantage of Radars over other sensors is that they work accurately in any weather condition – viz., rainy, cloudy, foggy or dusty, or low-light, etc. In the recent past, 77GHz Radar Modules have been gaining popularity as they generate better object resolution and greater accuracy in velocity measurement. These modules come in ultra-compact form factor and provides superior processing power. 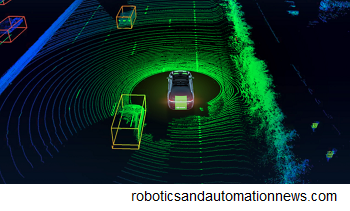 LiDAR: LiDAR helps in generating high-resolution 3-D maps of roads or target objects with detailed information of road features, vehicles, and other obstacles in the terrain. Using a LiDAR provides quick information of the objects and helps the autonomous vehicle to build a better perception of the surroundings.

Camera: Camera is probably one of the first sensors to have been deployed in vehicles for driver assistance applications. With the introduction of advanced image processing technologies and vision analytics, cameras have become one of the key sensors in any ADAS and Autonomous vehicles. Camera helps in object identification and classification, moreover, it provides depth perception of surrounding area including the position, distance and speed of objects.

GPS-INS: GPS aids in identifying the vehicle location accurately on the ground. In autonomous vehicles a highly accurate and precise GPS receiver system is required. The position errors should be contained within sub-centimeter or millimeter levels. The accuracy of the GPS system can be improved by combining GPS with an Inertial Navigation System (INS) and RTK (Real-Time Kinematic) base station which send periodic position correction messages to the GPS receivers.

Identifying the surveillance payload needs is critical to an Autonomous Surveillance vehicle. Based on the system requirement one can consider IR Cameras, PTZ cameras or a 3600 a bird-eye view cameras to survey the surroundings and communication systems, communication network, control consoles, etc. for command and control.

Surveillance is never completely independent of human intelligence. There is always a human eye to it. The operator console acts like a command center and facilitates the gathering of surveillance intelligence. The console should be equipped with reliable, communication and control systems, wherein the operator can take a remote control of the vehicle at any point of time, control the surveillance payload, make an emergency announcement, start or stop the vehicle, and so on. The teleoperator console can be integrated to an existing command and control center or it can be a portable kit. The portable console should be lightweight, easily deployable and can be designed around a powerful Touch Panel that runs an intuitively designed Web application for configuring missions and teleoperating the vehicle.

eStop and Telemetry Data: In case of an emergency, a user should be able to shut the vehicle down remotely from the teleoperator console. An e-Stop feature helps the users to safeguard the vehicle, and its electronics from getting tampered or to protect it from an unexpected technical failure. A dedicated wireless network such as radio network in ISM or Non-ISM frequencies or a long-range Wi-Fi is recommended for implementing the eStop functionality.

A state-of-the-art Autonomous Navigation Vehicle Design or an Autonomous Surveillance Vehicle can be developed using the technologies discussed above. A rugged all-terrain autonomous vehicle can be deployed for a wide range of applications such as perimeter surveillance, 24×7 patrolling of critical infrastructure, first response vehicle in hostile environment, and more.